When Aradia walks down the street in Manhattan, she starts to hear music.

For this Brooklyn native and entirely self-produced alt-pop electronica musician, it’s one of the best ways for her to glean inspiration. Aradia has been playing music since she was a child, and her roots in the classical music world yield intricate, layered work in the present-day. 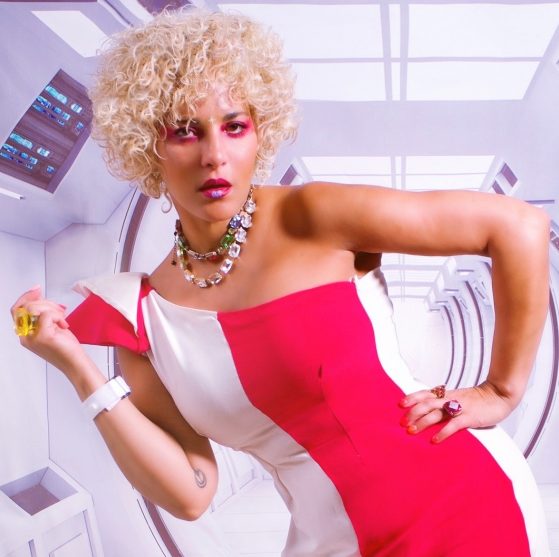 Citing the iconic German supergroup Kraftwerk as a formative inspiration in her musical journey, Aradia has a clear vision for the kind of music she wants to make and exactly how she wants to make it. Music from Aradia is hers through and through — turn on one of her tracks and it’s her vocals, her instrumentals, and her production come to life.

If the music of Empire of the Sun and Def Leppard were to intertwine with Robyn and Marina and the Diamonds, it might be getting close to the sonic worlds Aradia builds from scratch every day — but, even so, Aradia is something all her own. When inspiration strikes, whether it be in the middle of the night or on those New York streets, a song can often arrive as more than a melody or beat. She can build both parts of a new track simultaneously, allowing a song to enter her canon already fully-formed.

Her most recent track, “Gamma,” offered the perfect entry point for new listeners. Recalling the energetic, cosmic hyperpop of Charli XCX, “Gamma” takes off from the jump, a joyful, energetic celebration of life encapsulated in a three minute journey.

Aradia loves being onstage, considering the communal experience of live music something close to sacred. “I love playing shows, not because I love being on stage, but because when I see people’s energy go up while hearing my music, it makes me so happy that I almost feel like I can’t go on,” she explains. With years of performance experience under her belt, it’s easy to envision Aradia on festival lineups and in venues worldwide.

Rather than focus on commercial response, Aradia is laser-focused on the details of a song feeling right. And, beyond that, she’s meticulous and passionate not just in production but in her social focuses, too. She’s eager to contribute to creating a more equitable world, and hopes to encourage more women to take up production, too. She loves being at the board, but wants more people like her in the room.

The great thing about listening to an Aradia song, though, is with her imaginative touch, unique perspective, and expert skill set, that kind of world doesn’t feel quite so far away.